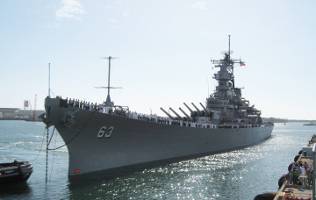 One of the most illustrious warships in the history of United States Navy has been preserved for the future with a Cathelco hull corrosion protection system. The USS Missouri served in some of the most famous naval conflicts of the 20th century and is best known as the site of Japan’s surrender in 1945 which ended World War II. After war time service in the South Pacific, Korea and more recently providing fire support during Operation Desert Storm in the Persian Gulf, the warship was decommissioned and donated to the USS Missouri Memorial Association in 1998. This January, after refitting work in Hawaii, the USS Missouri returned to her permanent berth in Pearl Harbour where she will attract thousands of visitors a year as a museum ship.

When the USS Missouri was originally built with a top speed of 33 knots, the hull was protected against corrosion with an impressed current cathodic protection system (ICCP) system consisting of ten anodes and several reference electrodes.

“However, after review of the current system, we proposed to install a new ICCP system with Cathelco diver changeable hull components that would ensure its effectiveness until the next scheduled dry dock in 20 years time. The Missouri’s engineers were very pleased to have the assurance that they would not have to dry dock if a hull component needed to be replaced. The new digital, state-of-the-art control panels, would also be more effective in combating hull corrosion over the coming decades,” Coulombe explained.

“Naval vessels operating at high speed require ICCP systems which are capable of neutralizing the corrosive activity on the hull caused by turbulence created by the propellers and as the ship passes through the water. Obviously, the requirements for a permanently moored vessel are very different,” said Aneel Mumtaz, a corrosion engineer at Cathelco’s headquarters in Chesterfield, United Kingdom.

The new Cathelco equipment has the advantage of using the latest ICCP technology providing greater effectiveness, whilst reducing the number of anodes and hull penetrations. The forward system has involved the installation of a 100amp thyristor control panel which is wired to two 50 amp linear loop anodes and reference electrodes mounted port and starboard on the hull. The advantage of linear loop anodes is that they emit a relatively high output from a small surface area, therefore fewer are required to achieve the necessary protection levels.

Manufacturer Representatives in the Marine, Offshore, and Industrial Markets

Cooley Equipment Sales (CES) represents manufacturers in the marine, offshore, and industrial markets. The goal is provide the end users with the latest technology, robust equipment, and to deliver solutions. Our clients receive a comprehensive package including a skilled technical sales staff with hands-on factory training. CES represents manufacturers with years of long-lasting relationships, which utilize the latest technological developments. These manufacturers trust CES to obtain proper criteria for design and installation. This trust is the basis for successful operation of their equipment. In addition, CES maintains application databases to follow up on maintenance and coordinate spares accordingly.
Cooley Equipment Sales - Serving the Marine, Offshore, and Industrial Markets BlackBird Theme by InkThemes.com